This is the second part of the Sustainable Expansion of FUSH˚ clothing factories series. Here, we will talk about our big expansion to a facility spanning over 2000 square meters.

The original factory ITP Gredlica started working on 22nd February 1958 near the small village of Oraovica in the south-eastern part of Serbia. During its golden days that lasted through a couple of decades, the factory made impressive numbers of knitwear and yarn and employed around 600 workers.

Unfortunately for the people of the Jablanica district, especially from Oraovica, the factory stopped working in the late 90s and finally went bankrupt in 2011.

It had a short spell of rejuvenation from 2012-2014 when textile production briefly resumed but failed due to an unfortunate turn of events.

Our involvement with the former ITP Grdelica facilities started in 2017.

Ok, that was the ultra-brief history of what is now a FUSH˚ textiles factory. Now let us tell you a story of just how much we had to do to get the factory into the 21st century.

As we said, after the initial brief inspection in 2017, we bid for the factory and officially acquired it. The aim was to stop outsourcing for the following services – fabric manufacturing and sewing. The ITP Grdelica project was supposed to handle both services.

The challenges for achieving that kept piling up as we got more involved. One problem that comes with the literal territory of the factory is the fact that Oraovica is a remotely-located village and, as such, is often hit with water and electricity shortages. That is something that was accounted for.

But a lot wasn’t.

Some of such issues were due to buildings not adhering to the current standards required by Serbian laws. Also, some of it had to do with the 20-year-long neglect of an already inefficiently-built factory. 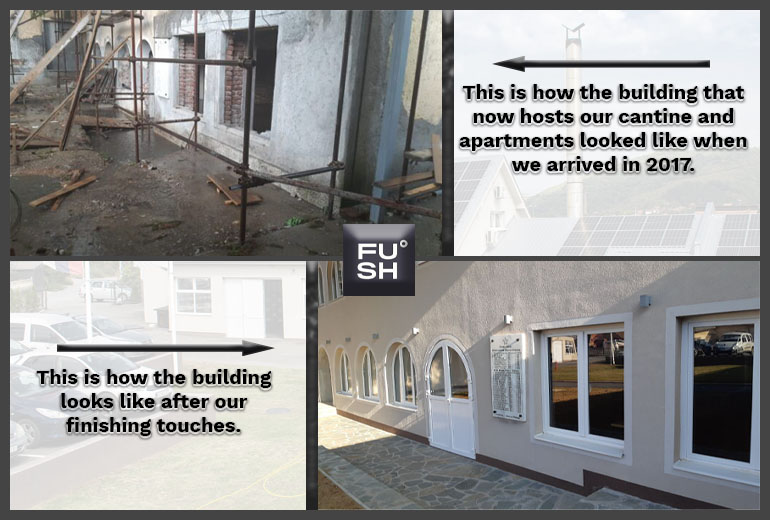 Here’s a list of all the issues we faced:

And what we did was, for the most part, start from scratch. That means we’ve:

Next, we had to make the facilities on factory grounds energy efficient. In some cases that meant taking down the entire building and constructing a new one. In some cases, it meant thermally insulating the old ones and changing windows and doors on them. 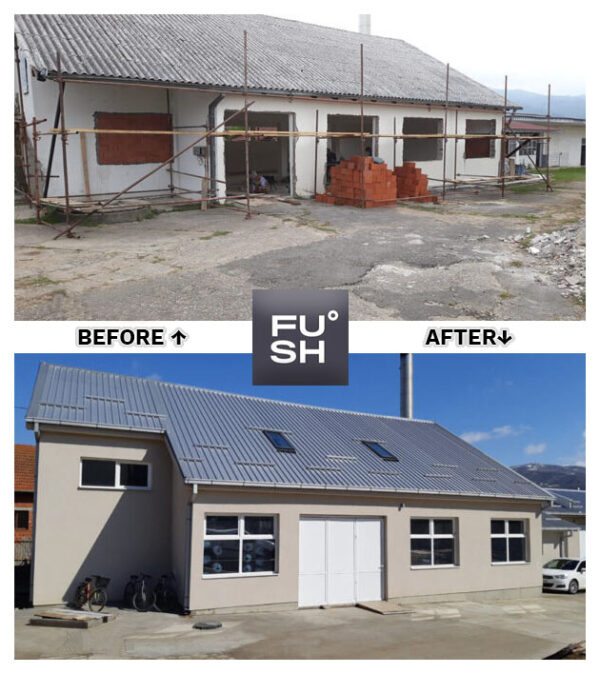 The following big problem was flooding. Imagine the state of an unprofessionally-built facility from the 50s, abandoned in the 90s. If your guess was rubble-like, you were right. Add to that that not every building had foundations, so some of them had a higher susceptibility to letting in water.

Enter excavators, enter concrete. We’ve dug through the entire facility and poured a lot of concrete to eliminate the flooding issue, which we did. With all the facilities tightened up, we could finally start putting machinery in the building:

Sustainability at the Oraovica clothing factory

As Oraovica has no link to the municipal sewage system, the most common way of treating wastewater was simply chucking it into the nearby river. That was not at all what we planned to do. We’ve installed the RotoClear 40 PE wastewater treatment plant to solve this issue. It’s capable of handling wastewater of our factory working at 100% capacity. It even has accreditation from the PIA. 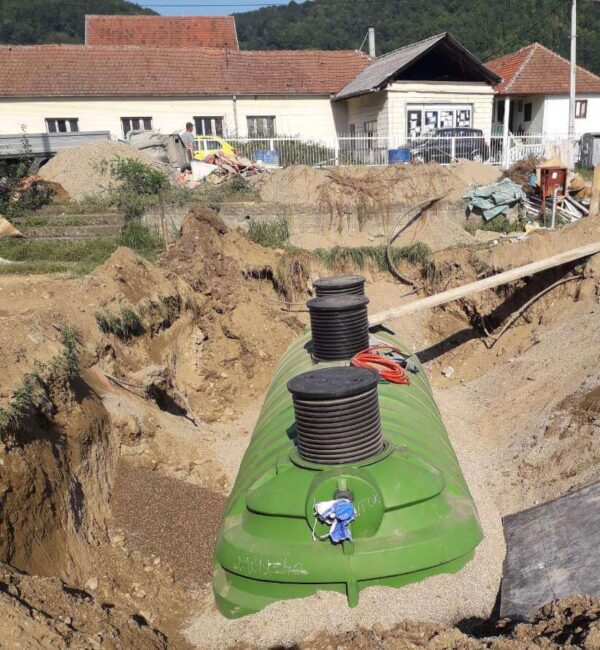 RotoClear 40 wastewater treatment system during installation at the factory grounds in Oraovica.

To ensure we’re making the wastewater as safe as possible for the environment, we’re using a mixture of good bacteria developed by a Serbian company Bistrol. It fully decomposes any organic waste, making the water leaving our factory 100% eco-friendly. 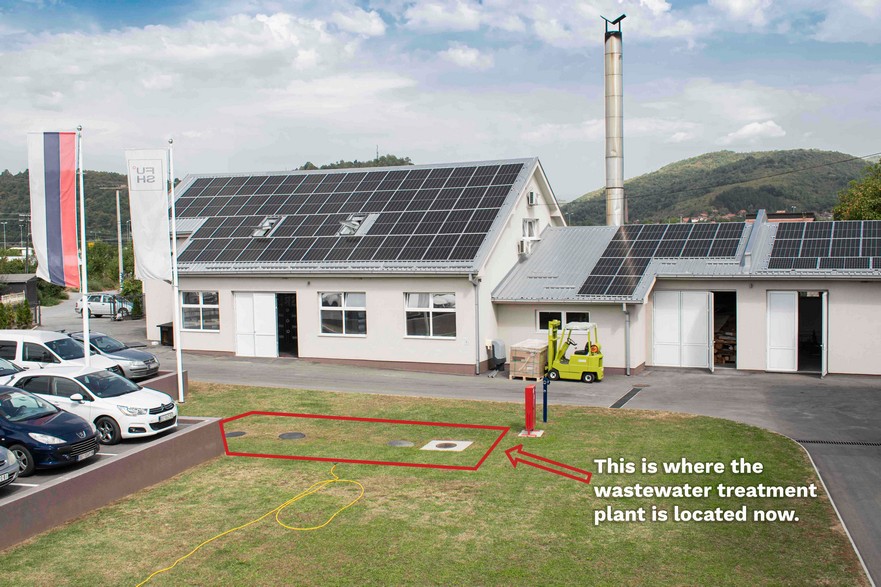 Since people are and should be a part of any company’s sustainability efforts, let’s learn more about people of FUSH˚ from Oraovica and their working conditions. It’s great that most of them are people from the industry. That’s no surprise, being that the textile trade was strong in this region and hopefully will be again. 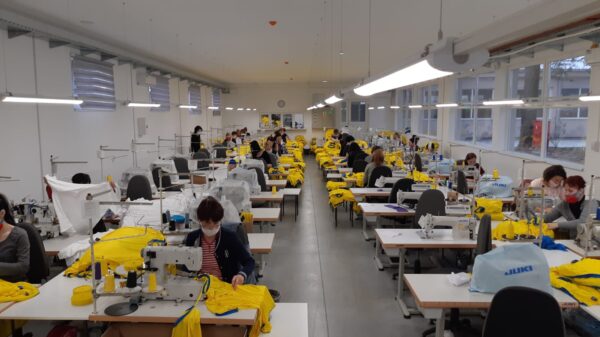 Our sewing department during the pandemic. They work at a reduced capacity to maintain safe working conditions.

We’ve managed to employ 100 textile professionals so far. The lowest wage at the factory is 20% higher than the national minimum wage.

The factory holds an ISO certificate for worker safety (ISO 45001:2018). Also, being that there’s no public transport in rural Serbia, our workers have an option to use the company bicycles.

The future of our Oraovica clothing factory (2022 update)

The factory can rely 100% on solar for all its electricity needs for two-thirds of the year. During overcast periods, solar panels provide anywhere between 35% and 65% of the electricity needed for all departments to work at maximum capacity.

We’ve finished all the apartments in the factory complex so you can pay us a visit and stay the night right where the magic of clothing manufacturing happens. Take a virtual tour to check out one of the rooms.

Request a quote from us

To get the best possible price and lead time estimate, please include the number of designs and pieces per design, fabric choice, sizes, and printing options.

This website uses cookies to improve your experience while you navigate through the website. Out of these, the cookies that are categorized as necessary are stored on your browser as they are essential for the working of basic functionalities of the website. We also use third-party cookies that help us analyze and understand how you use this website. These cookies will be stored in your browser only with your consent. You also have the option to opt-out of these cookies. But opting out of some of these cookies may affect your browsing experience.
Necessary Always Enabled
Necessary cookies are absolutely essential for the website to function properly. This category only includes cookies that ensures basic functionalities and security features of the website. These cookies do not store any personal information.
Functional
Functional cookies help to perform certain functionalities like sharing the content of the website on social media platforms, collect feedbacks, and other third-party features.
Performance
Performance cookies are used to understand and analyze the key performance indexes of the website which helps in delivering a better user experience for the visitors.
Analytics
Analytical cookies are used to understand how visitors interact with the website. These cookies help provide information on metrics the number of visitors, bounce rate, traffic source, etc.
Advertisement
Advertisement cookies are used to provide visitors with relevant ads and marketing campaigns. These cookies track visitors across websites and collect information to provide customized ads.
Others
Other uncategorized cookies are those that are being analyzed and have not been classified into a category as yet.
SAVE & ACCEPT